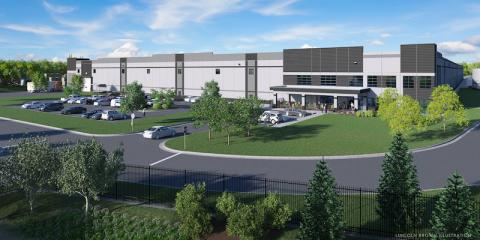 Construction is currently underway for a sprawling 421,000 SF bulk distribution center for the nation’s largest home-improvement retailer that is expanding into Connecticut this year.  The $50 million build-to-suit project is being developed by Scannell Properties in South Windsor on behalf of Home Depot and Scannell will hold a long-term lease on the building when it’s complete in Q4, 2020.

Home Depot currently operates about 30 retail stores though out Connecticut and hopes their new distribution facility will enable the retail conglomerate to speed up delivery to their customers and stores with same day/next day delivery.

Scannell’s Development Manager Daniel Madrigal says the new facility is unique because it is served by the existing short rail line that is being extended into the site at two locations.  One location extends into a storage yard and the other into the interior of the building.
The new site initially had some challenges associated with it, as Madrigal says the site was partially developed on agricultural land that had some endangered species related concerns, “but we worked well with Connecticut’s Department of Energy & Environmental Protection (DEEP) to find solutions and obtain the permits we needed to proceed with the project,” says Madrigal. “The town and the state were extremely cooperative in making this entire project come together.”

Last year, the town of South Windsor’s Planning and Zoning Commission approved a special exception for the planned development and weeks later, the town council unanimously greenlit a seven-year tax abatement for Home Depot as an incentive for the retailer to invest approximately $50 million in the distribution center. The abatement reduces the estimated property assessment by 50%, resulting in an estimated tax benefit of $309,925 a year.