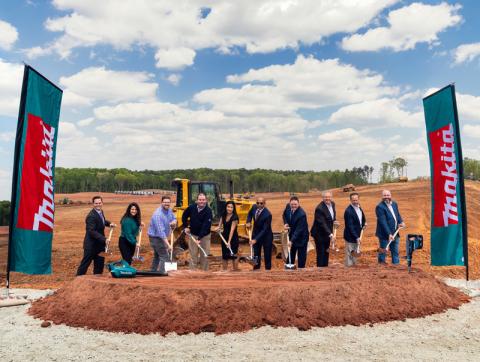 HALL COUNTY, Ga., April 21, 2021 /PRNewswire/ — Makita U.S.A., Inc. held a ceremonial groundbreaking yesterday to launch construction of a new 600,000 sq.ft. state-of-the-art facility northeast of Atlanta in Hall County, GA. The new facility will be constructed on 80 acres of land and is part of Makita’s planned future development to address continuing growth in the United States.

“Today Makita begins a new phase of expansion with the construction of another new facility,” said Joe Blackwell, senior vice president operations, Makita U.S.A. “This is part of our continuing growth here in the U.S.A., and this new facility will further increase our operations, service, and training capabilities. This means expanded service and support for our customers, while creating more jobs in the region.”

The new state-of-the-art facility will serve as a distribution center, and will also include a sales and training center, customer service resources, and a Factory Service Center. The location has adjacent space for future expansion up to 800,000 sq.ft.

The groundbreaking marks another milestone in Makita’s significant investment in the U.S.A. Construction of the Atlanta-area facility follows the August 2020 opening of a new distribution, training and service facility in Reno, NV, and the 2017 opening of a similar facility in Wilmer, TX. Makita’s distribution chain also includes operations in Mt. Prospect, IL, Buford, GA, and La Mirada, CA. Additionally, the manufacturing and assembly plant in Buford is one of ten Makita manufacturing facilities worldwide.