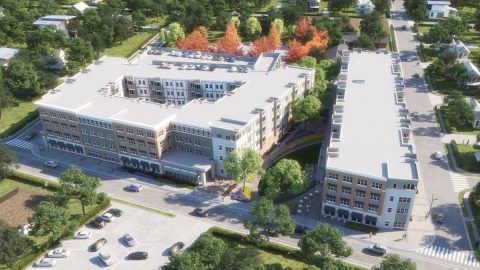 Union Green will be host to a mix of 172 luxury units, 15,000 square feet of Retail, Class A apartment finishes, multiple fitness spaces, salt water pool and sun deck, dog park, garage and surface parking, and a “pocket-park” amongst other luxury provisions – first of its kind in Brownsburg.

Scannell Properties broke ground on November 2 on a $30M mixed-use and multi-family development at 315 N Green St. in Brownsburg, IN. Named “Union Green,” the massive project is part of a $70 MM redevelopment effort to create a new downtown for Brownsburg and Scannell’s development leads the transformation of North Green Street into a pedestrian-oriented, lively economic center where people can live, work, and play. Ideally situated, N. Green St, (also known as SR267), is the main ingress/egress to and from I74 and 465 and runs through the entirety of the Town.

The mixed-use and multi-family development concept for Brownsburg was first conceived by Rick Bolt, previous owner of the property and a prominent member in the Brownsburg community. Over the course of many years he methodically assembled the parcels that now host Scannell’s development. Union Green will be host to a mix of 172 luxury units, 15,000 square feet of Retail, Class A apartment finishes, multiple fitness spaces, salt water pool and sun deck, dog park, garage and surface parking, and a “pocket-park” amongst other luxury provisions first of its kind in Brownsburg.

The development will consist of a North and a South building with the pocket park/open green space separating the two. Residents and Retail tenants alike will have access to the pocket park and green space, livening up the park and development in its entirety. Heightening the groundbreaking event was the announcement by Scannell of their first retail tenant to occupy space at Union Green. “Rush on Main”, a Chicago-style eatery, plans to open a second location at Union Green (the first residing in neighboring downtown Zionsville).

All team members of the development gathered to celebrate the exciting occasion at the groundbreaking event on November 2, including representatives from CRG Residential, DKGR, Banning Engineering, Barrett & Stokely, Lake City Bank, GM Development, and the Town of Brownsburg. Scannell Director David Ravensberg says, “Scannell is excited to finally celebrate the momentous occasion. We have been working diligently with the Town of Brownsburg for more than two years to turn the concept into reality.”

CRG Residential – Joint Venture Partner and General contractor (Carmel, IN) helped host the event. DKGR is the Architect. Property Manager Barrett & Stokely (Indianapolis, IN) will begin operating a leasing office out of the neighboring house early 2018 until Union Green is set to open the first units in the Fall of 2018.