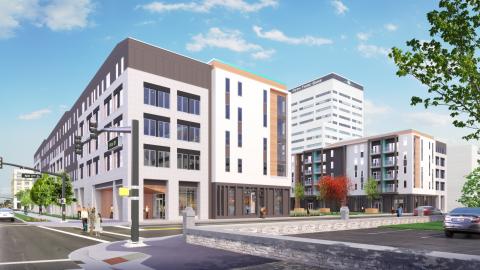 Scannell Properties and officials in Evansville, Indiana, cut the ribbon last week on the “Post House,” a $42 million, mixed-use development in the city’s downtown. The Post House, which received funding through the state’s Regional Cities Initiative, was developed by Scannell Properties and Vectren Corp. as a “living laboratory” to test smart energy technologies. See more photos of the Post House in a gallery feature in the Courier Post.

The new development, which includes 144 apartments – from studios to one and two-bedroom units –  is part of the Indiana Economic Development Corporation’s Regional Cities Initiative Fund, a state-level incentive program that is investing $126 million across the state, $42 million of which has been dedicated to Southwest Indiana. In addition to apartment units, Post House will host retail, office, sub-grade parking, and outdoor community space as components of the project.

“By giving more individuals the opportunity to live and thrive in downtown Evansville, we strengthen the core of the city and foster an environment for increased collaboration,” Beth McFadin Higgins, president of the Southwest Indiana Regional Development Authority, said in a news release. “The use of smart appliances puts Indiana’s Great Southwest at the forefront of innovation.”