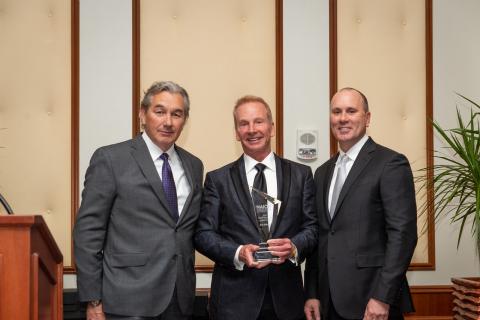 The 12th Annual NAIOP Real Estate Awards is the premier commercial real estate event recognizing outstanding development projects and brokerage professionals for industrial, office and mixed-use properties in Indiana completed in 2019. The honoree this year is Bob Scannell, founder and President of Scannell Properties, a national commercial real estate company with roots in Indianapolis since its inception 30 years ago.

Developers, owners, brokers, designers and their teams came to the Conrad Hotel on March 5 to honor a man who has made outstanding achievements over a long and distinguished career. Bob started Scannell in 1990 with his partner, Doug Snyder – a former colleague at Duke Realty. Both seized an opportunity and model for developing national build to suit, lease and sales before spanning out into speculative development as Scannell began to grow and flourish. Today, Scannell has expanded into office, retail and multi-family housing development.

The company remains a privately-owned real estate and investment company that completed 328 development projects totaling 63,600,0000 million SF in 44 states and 3 Canadian provinces. In 2018 Scannell expanded their industrial development operations into Europe with an office in London focusing on the core markets of France, Germany, Italy, the Netherlands and Spain. The value of all their projects is estimated at over $5 Billion.

“I am honored to be recognized at NAIOP’s Real Estate Awards this year,” says Bob Scannell. “Over the past thirty years we have built Scannell from the ground up as a privately held and self-funded company. I credit our success to working with outstanding and committed colleagues in the industry and our ability to hire a team of experts who work at Scannell.” Scannell concludes, “To me this Legend award has two meanings, one of which is gratitude that I am being recognized as an industry leader, but more important is the fact that Scannell is leaving both a personal and company legacy in our industry, and we will continue to grow and be successful.”

Scannell Properties says their history of success over the years can be attributed to their experienced leadership, internal expertise, client-focused relationships and fiscal responsibility.